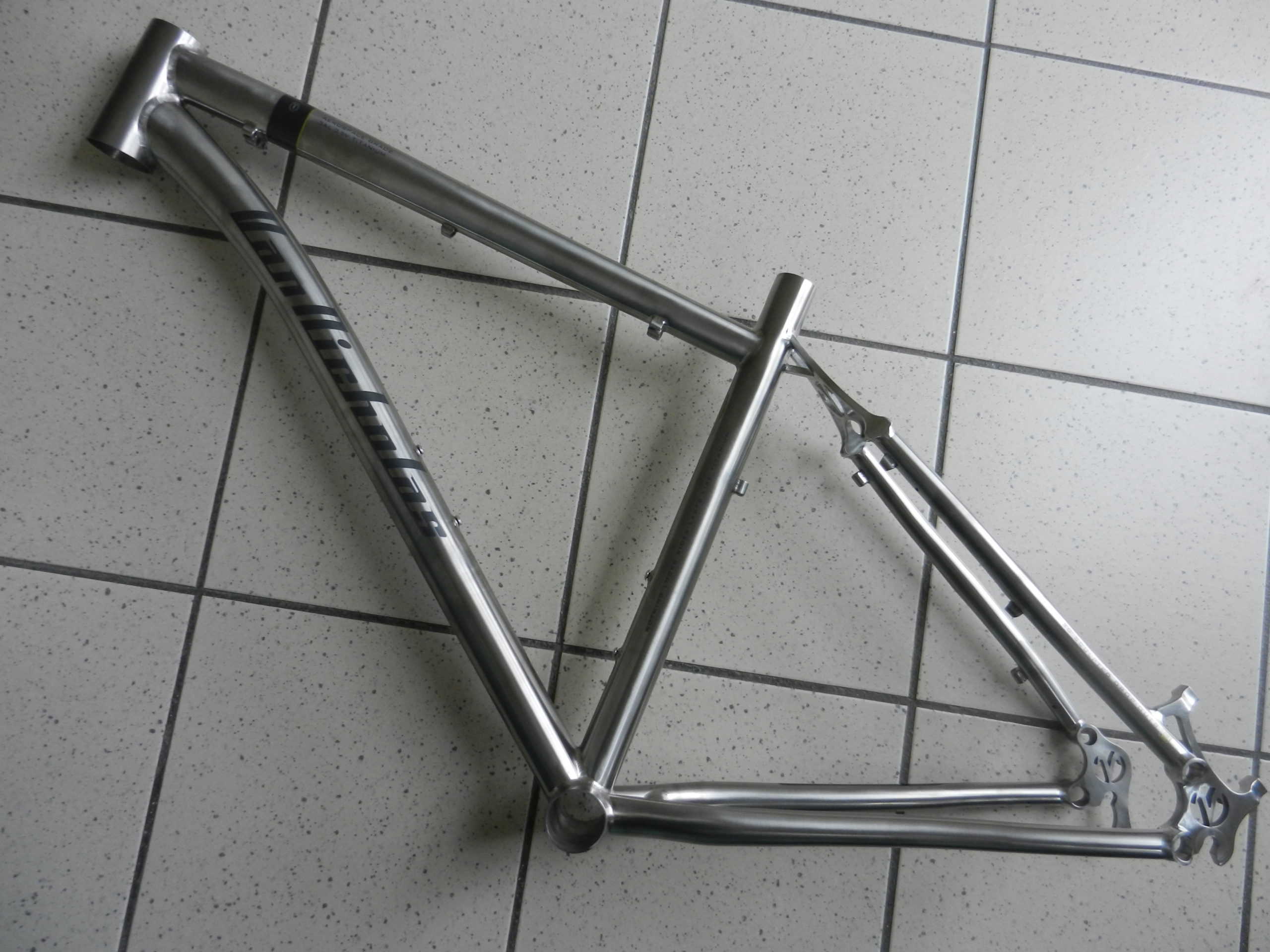 Building my Van Nicholas Tuareg Titanium 27.5″ frame. If you don’t want to read all my blah blah and just want to see the latest complete build. Jump directly to https://bit.ly/2UYrxZ9

Otherwise please read on and enjoy

The frame cracked and so I ended my biking year riding my road bikes. Luckily for me it was a shitty end of year weather wise and so it didn’t worry me to much, except that I missed doing the Roc d’Azur with the Tuareg.

Van Nicholas Titanium frames carry a life time guarantee. I got in touch with them to see about getting the frame changed. This was in October 2012.

I believe that they are right in doing so, but this meant that they had no frames left in stock, because of this I would have to wait until 2013 to receive a new frame.

The Tuareg was and still is one of the best Hard Tail Ti frame’s around. At least in my opinion (Now that it’s taken the new 27.5″ direction, it’s going to be even better)

I decided to wait for the new frame to arrive (though I didn’t really have a choice, did I ?).

This meant me losing several months of MTB riding. Incurring new costs for new components that would have to be bought.

I’m impatient to receive the frame and get some MTBing riding again. I’ve already started buying the new equipment before the frame arrives. Why ?

My existing components forks, wheels and headset will not fit the 27.5″ as they are for a 26″ frame, also to save some time. As soon as I receive the frame I can build it.

This I knew when I accepted the offer for the exchange, and was happy to buy new components, though not my wife…

The frame has arrived. It’s very much like my last one its good. Nice welding, though this one seems stronger than the older version. The drops at the back are smaller and seems thicker. The triangle behind the seat post has an extra piece welded to the post giving it extra strength. It weighs in at 1.76 kilos

Here are some technical details that are not shown on the Van Nicholas web site. At least at the time of this post.

It’s light. 1570 gms (weighed on postal scales, without the QR and 74 gms for the QR) with a 100 mm travel which is perfect for the frame, and it also has a 15mm QR rather than 9 mm standard which should be more rigid. The specs look good, For info it’s 110 gms heavier than the Fox on the older bike.

Wheels http://www.jpracingbike1.com/ this is a company that specialise in building wheels and have a very good reputation, and they are French which makes a nice change. Being hand built. They wont be ready until the middle of March.

I’m Staying with NoTubes Crest, they are excellent rims, I’m changing the hubs and spokes though this time.

Made to measure, this will be the most expensive item as the wheel set will set me back 820 euros. They weigh in at 1385 gms the pair, extremely light and very strong 🙂

The headset, this will be a Chris King headset, so beautiful and so well made, the frame and my forks are conical / tapered. Van Nicholas informed me that it’s a 49 mm lower cup, this will set me back $160  I’m matching the colour with the wheel hubs.

The frame is a pressfit BB (not shown on the Van Nicholas web site) I’ve ordered a Truvativ Ceramic GXP BB. Very expensive at 160€ but meant to be the best around. I gain 40 grams, whoopy….

I have already ordered and received the tyres, I will be using Schwalbe Rocket Rons for the front and Racing Ralph for the back, sadly for the moment Schwalbe don’t make the Racing Ralphs in DD version, which I prefer even if they are heavier.

I’ve fitted the Hope Tech X2 brakes  that I recuperated from the old Tuareg, these are really sexy, machined CNC alu, with braided hoses. Both rotors are the floating Hope Saw rotors.

Like with the previous Tuareg. Van Nicholas have not taken into account aviation cables that are used with some hydraulic brakes. So I’ll have to modify the lugs to insert the cables. Why ?. Standard lugs have an inside diameter of 5 mm for normal cable. Aviation cables are 6 mm and wont pass through.

I used a Dremel to cut slots on the lugs as seen in photos. Then with a flat screwdriver in the slot was able to widen slightly the lug to take the cable then used a fine metal file to make sure no rough edges were left.

I’ve since ditched the Racing Ralph and gone for a Cobra Hardskin. The RR is just to light and fragile for a back tyre and have to many friends that puncture or torn them to often. I am trying the Cobra, its heavier but ‘safer’ (until Schwalble bring the RRs in DD version for the 27.5).

Have also bought a Rubena Scylla tire to try, they look good, are not to heavy and are almost 20€ cheaper than the Schwalbe, now fitted but not tried yet.

I have added Hope matchmakers for the brakes and the XTR shifters, this making the handlebars look much tidier. I have also changed cassette to a Sram 1099 saving over 120 grams ….

To see the bike finished and built up https://bit.ly/2UYrxZ9

Just finished probably my last trek for this year. From the french town of Dole to Lons le Saunier. 145 kms with over 3700m ascent. Five days, four nights. Lovely paths and views, probably one of of the best treks I've done. https://bit.ly/3pt80wV #trekking #GR59 #ViaCluny